The benefits of houseplants go far beyond the aesthetic, making them much more than just some pretty greenery. Studies confirm that plants are good for buildings and for people: They play a vital role in providing a healthy working environment. We had a closer look at some popular varieties, each of them a great addition to your office.
June 30, 2019 by Rosa Schaberl 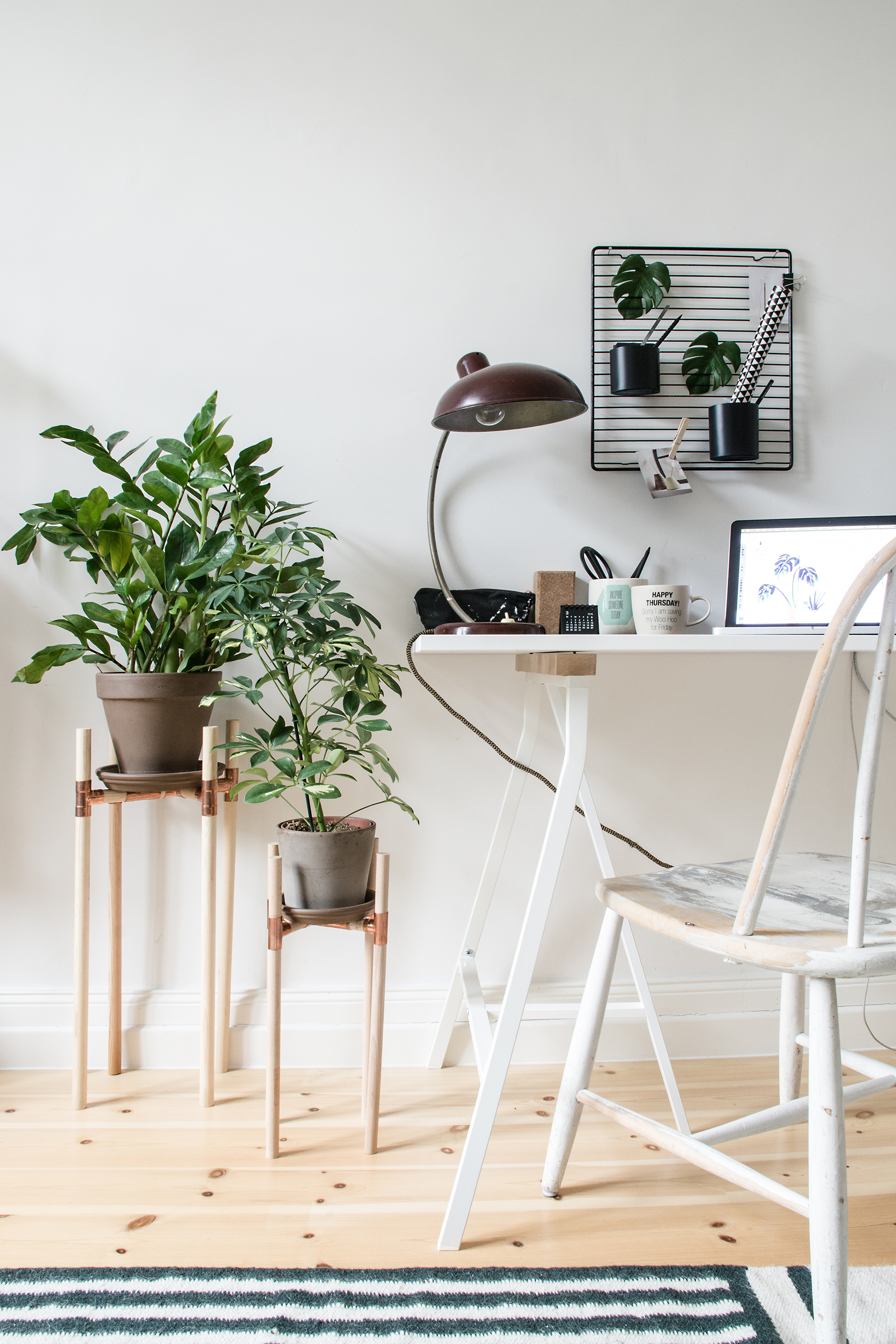 Productive, motivating and good for the working atmosphere – what sounds like classic requirements for future employees, describes quite a common design element: houseplants.They have always been around, yet they are currently experiencing a revival. Just look at the “Urban Jungle” trend, transforming living rooms around the world into green oases. The fact that plants transmit a multitude of positive effects to our interiors has been confirmed by numerous studies. They examine the effects on people and space in general, but also specifically in the context of the workplace. One of the best-known studies was carried out by NASA in 1989, but it’s still relevant today. It proved the purifying effect of houseplants or, to stay in the office jargon, the productivity of our green co-workers: not only do plants produce oxygen, they also absorb pollutants such as benzene, formaldehyde and ammonia. Another study was carried out internally by BMW in Munich at the beginning of the 2000s. The car manufacturer took a close look at the health-promoting effects of plants in the office, collecting data on the indoor climate and acoustics. Not only the climate benefits from greening, also the employees stated that they feel more comfortable and motivated in the workplace. These are just two examples from a long list – from whatever perspective you look at it, you’ll always come to the same conclusion: plants are good for us and for our spaces.

For obvious reasons the spider plant is particularly popular in offices: it is easy to care for, tolerates both sunny and shady locations and will survive short periods of time without watering. In addition, the plant improves the indoor climate by reducing the formaldehyde concentration and filtering xylenes as well as toluene from the air. These two aromatic hydrocarbons are used in paints and varnishes and have, among other things, a deleterious effect on the respiratory tract.

Thanks to their striking foliage, they are a popular indoor design element. The big variegated leaves with patches of white are eye-catching indeed. In addition, large or large-leaved houseplants are particularly helpful for the acoustics in a room. Dieffenbachiaplants need a light to semi-shaded location and must be watered regularly; make sure to clean the leaves from time to time. The plant will thank you with removing a good amount of toxins from the air.

Appearances are deceiving here – the pretty flower of this houseplant is strictly speaking not a flower, but a leaf. However, this takes nothing away from its decorative looks. The flamingo flower certainly adds a little color to the office while also having considerable effects on the indoor climate. The plant purifies the air of formaldehyde, xylenes, toluene and even ammonia.

Find more inspiration in Urban Jungle, a book by Callwey on living and styling with plants:

➔ All Articles Next Article ➔
Planning
Best Workspaces 2022 – Submit now!
Best Workspaces has reinvented itself!
➔ Read Article
Portraits
A Vision of the Future
Colliers International is one of the largest real estate companies in the world. During lockdown the company conducted a survey on the challenges and prospects of the current work situation. Based on this data, Colliers can now make some very precise and exciting forecasts. Prof. Hermann Schnell, Managing Director and Head of Architecture & Workplace Consulting, talks about his job and our new world of work.
➔ Read Article
Portraits
Trend as a Tradition
There is hardly an office that does not have a piece of furniture from USM. USM owes this presence in our workplace culture both to its cutting-edge product developments and the longevity and compatibility of its systems. However, it’s only when you know the company’s history that you can understand the omnipresence of the products. We talked to CEO USM Germany Bernd Wagner and Dr. Thomas Dienes, Group Product Development Director, about trends and traditions.
➔ Read Article
Submit your workspace ➔
Best workspaces initiators